Building a custom Broadway producer for the Twitter stream API

In order to better understand Broadway and GenStage I wrote a custom producer that reads tweets from the Twitter stream API and produces event messages. The experience was pretty fun and this article describes in more details how it went.

Think of Broadway as a facilitator to build data processing pipelines.

It is a tool that will connect to your queue system or to a stream of events and will emit those events to consumers according to the demand from those consumers. This feature is called “back-pressure”. There is a nice article by José Valim about how Change.org is using Broadway to process millions of messages without compromise the stability of the system.

Broadway will fit better in an environment that needs to process a lot of data, but it is also recommended for simpler cases that aim to scale with time. If you have a stream of data coming from Kafka, RabbitMQ, Amazon SQS or Google Cloud Pub/Sub, then Broadway already has an adapter ready for you. Otherwise you may need to write your own, so let’s see an example! 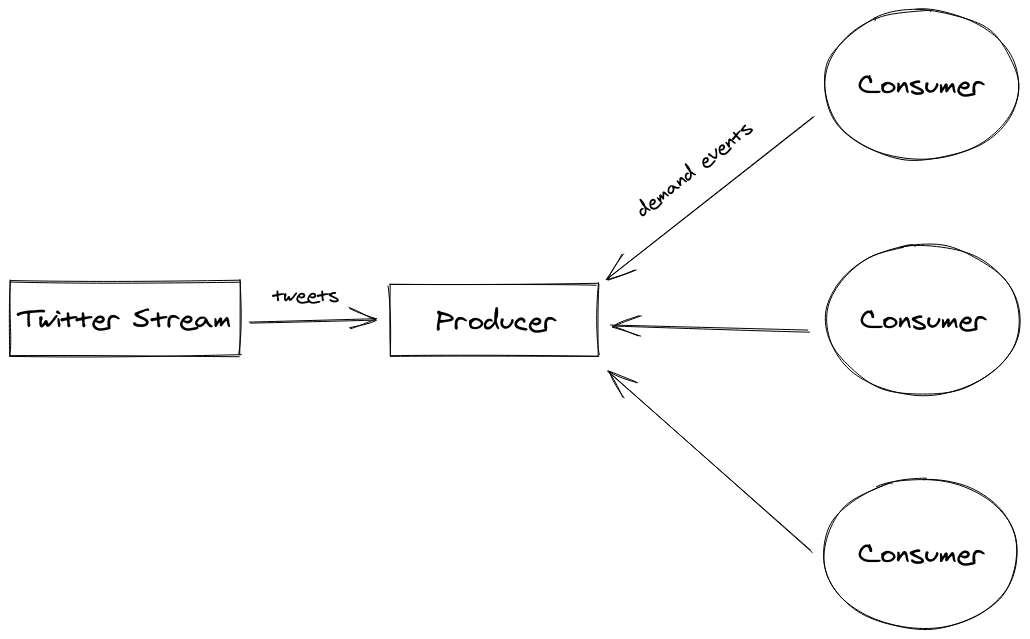 I choose to write a producer based on Twitter stream because it is a HTTP stream, which is simple and can emit a lot of events per second.

I first tried to write a cURL command to fetch data from that stream.

You can setup a new application and grab your token following the Twitter V2 API page.

On the Elixir side we can use Mint to retrieve the data and have more control of our stream. Mint is different from most Erlang and Elixir HTTP clients because it does not have a built-in connection pool and has a process-less architecture. This is a perfect fit for Broadway because its producers form a pool of their own. Instead of maintaining a pool of producers and a separate pool of HTTP connections we just have the former and so we avoid overhead of any unnecessary processes and message passing to achieve maximum performance.

Here is an example of how we can consume the tweet stream:

We can execute this code by running TwitterStream.start(token) in our IEx terminal. This stream is always pushing and will never end unless you kill this process.

There is another type of producers which requires the polling of events, and they usually do that from time to time. An example of this is Amazon SQS Broadway. For this article we are going to use a push stream of events from Twitter to our application.

This is the piece that will gather data from our Twitter stream and deliver tweets as event messages to consumers.

Broadway has an important concept: producers only deliver events when consumers ask for them (the so called back-pressure). We are going to slightly ignore this because our producer is going to deliver events imediately as they arrive, and Broadway will take care of matching the number of events with the demand. But be aware that, whenever possible, it is better to have a more fine-grained control of the demand and stop producing events when no one is demanding them.

Note: Our example does not make usage of back-pressure, because Twitter itself will always emit events, and we can’t tell Twitter to stop it. We will emit the events right away and rely on Broadway’s internal buffer to discard events that are above the capacity of our consumers.

Our producer has to define two main functions: init/1 and handle_demand/2. Those callbacks are described in the GenStage documentation because our producer is primarely a GenStage producer. Broadway provides two other callbacks that can be used to initialize or stop things in the life-cycle of a Broadway topology.

Let´s go to our init/1 function:

The most important line of this function is the return:

It says to Broadway that this is a producer and defines the state of this producer as the second element. We also start the connection and first request to our stream with the function connect_to_stream/1 that can be viewed next:

The request_ref is a reference to assert that we are reading data from this particular request. It is going to be used when we start the loop for reading messages. Speaking of loops, we are going to enter in one: Mint works by sending messages to “self”, which means that every interaction will generate a message to the process that called it. This way we can continuously read the stream inside a loop.

We are going to use the handle_info/2 callback that is slightly different from a typical GenServer: it will return a tuple with 3 elements representing what to do, what messages to produce and the new state respectively.

After the connection and first request we are going to perform our stream requests inside that handle_info/2 callback.

It’s important that we always update the connection value in our state. This is because the stream expects that we pass the last conn for the next interaction. Another caveat is the need to restart the connection after the server closes it or after some kind of error. We do that here by sending another message to self that will reconnect after a few seconds.

Let’s go to the process_responses/1 definition:

Since Mint is returning a HTTP2 message containing many possible frames, we are iterating through them and updating the state to retain that tweet. We are using a special struct for the message called Broadway.Message, and that struct has a attribute called acknowledger. This struct has all attributes Broadway expects for processing the event properly, and the acknowledger attribute is important because it says which module is responsible for acknowledging the messages after finishing the pipeline.

Acknowledging is critical in a queue system to mark a given event message as processed or to clean up that message from the system after processing it. In our example we don’t need this because Twitter stream is a firehouse of events.

So far we dealt with the incoming flow of messages. Now we need to implement the handle_demand/2 function. Here is how it looks like:

For this example, we are relying on Broadway’s internal buffer which is going to store messages until a new consumer asks for them. But, as I said before, in 99% of the implementations we do need to have a better control of how many events we reply to our consumers and really implement a back-pressure mechanism.

Wiring it all up

Now that we have our producer we can setup a Broadway topology to consume events. The topology is a module with three main functions: start_link which configures this consumer, handle_message which processes each message and do most of the work, and handle_batch which manipulates a group of messages. For instance, if you want to process tweets and store them in the database or in S3, you could submit them in batches using these callbacks. You can define multiple batchers, each taking a maximum size and a maximum interval for batching. In this example, we will have a single batcher.

The OffBroadwayTwitter module will dictate how this pipeline is going to process the events because it controls many aspects like concurrency and batch size. After processing a batch of messages it will ask for more events to the producer.

In my example the only task is to print all the Tweets after “upcasing” it:

Finally we want to test those things together. To facilitate, I added the topology module to my supervision tree in the OffBroadwayTwitter.Application module:

We have our consumer that requires a bearer token from the system environment in order to properly work.

To start the app, you can run it with IEx:

You should see a lot of tweets in upcase :)

Broadway provides a solid model to solve problems of data ingestion. There are producers for the most important queue systems out there, like Amazon SQS, RabbitMQ, Google Cloud Pub/Sub or Kafka so you don’t need to implement a new one. But if you, like me, don’t find the Broadway producer implementation of your choice, you can rollout your own. I hope you have fun in the process! :D

The application from this article can be found at https://github.com/philss/off_broadway_twitter.